Give Blood Play Hockey was founded in 2007 as a high school project in memory of tournament founders father/grandfather Peter Oliver Clauss. Peter was an incredible example to his 10 children and 30 grandchildren. After a lifetime of being a blood donor, his battle with Multiple Myeloma required him to be a recipient of other’s Blood donations. His example was the inspiration for the founding of the Give Blood Play Hockey Tournament. Peter’s lifelong example of hard work and dedication inspires the “Give Blood” drive at each year’s event.

In 2012, we asked an important question of our players, coaches, sponsors and fans: “Who Do You Play For?” Stories were shared of victories and loved ones lost to this horrible disease, everyone united to “Skate For a Cure.” That year, 102 teams battled in 18 divisions for the coveted Blood Cup. Over 3,000 spectators watched competitive hockey, were entertained by the skills competition, shopped dozens of vendors, were fed by top rated restaurants, and enjoyed plenty of fun entertainment throughout the weekend.

In February of 2013, the new wing of CHOC Children’s Hospital was dedicated and opened its doors to the first patients on the Oncology floor. It was beyond our wildest dreams to see our hard work come to fruition in the Give Blood Play Hockey Patient Care Room and Medication Station. Give Blood Play Hockey was also honored with the CHOC Charley Hester Award for Outstanding Volunteer Organization. Our 2013 event marked some other firsts as well; the No Hair Don’t Care campaign kicked off and 26 generous individuals donated their hair to the Locks of Love Foundation. In addition, the first annual Keeper Award was presented and will perpetually reside next to the Blood Cup commending the name of the team that raises the most money each year. Most importantly, we moved our focus to support funding of Research for Clinical Trials and Research into the Genomics of Diseases like Cancer and Blood Disorders. We did so, because we were inspired by our ambassador, Casey Strale, who courageously battled a rare cancer called Adrenal Cortical Carcinoma for almost 4 years. Without CHOC’s specialized team of doctors and surgeons, he would not have survived more than a week when initially diagnosed. Casey lost his fight on June 24, 2013.

In 2014, we met now 10-year-old Niko Greco, who is bravely battling Leukemia. It’s because of these warriors that we need to keep fighting and invite you to join the Give Blood Play Hockey team as we continue our commitment to Research and Development to find new treatments and to someday find a cure for kids like Casey and Niko.

In 2018, Give Blood Play Hockey surpassed our $1,000,000 donation to CHOC Children’s and 3500 pints of blood collected. This fall, we are asking our supporters to continue to #Bleed By Example. We invite you to donate blood, play hockey, volunteer your time, donate items or just come out to support this great event. Online team registration will open on July 1, 2019. There is also a Direct Donation Pay Link on the website where you can make a donation to CHOC Children’s in the name of your hero or team. We have no doubt that the 2019 event will be our best event yet. The count down until the tournament, scheduled for October 25-27, 2019 at The Rink Irvine Inline has begun. We cannot wait to drop the first puck for our 13th annual event. The planning is in full swing and we’d like you to be involved. We hope that you will join us as the #FightForTheKids continues. You can read all about the tournament at www.givebloodplayhockey.org and LIKE us on Facebook. Do you want to make a donation, be a sponsor, give blood, or be a volunteer? Please email us at gbph4choc@gmail.com. 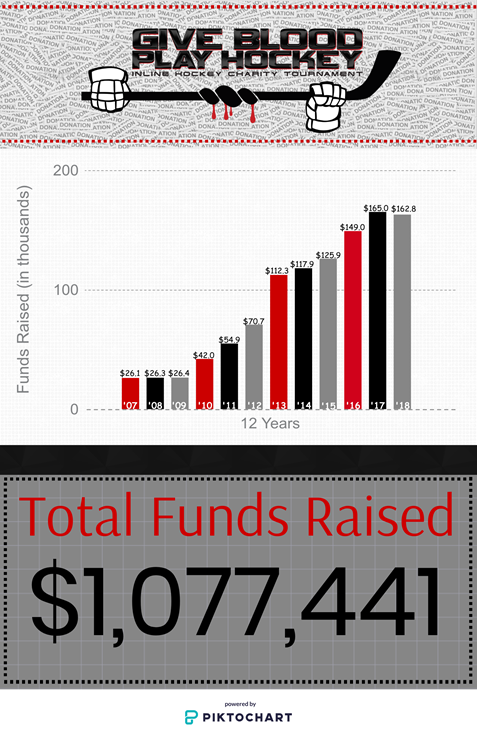 Our Mission is Simple - GIVE BLOOD. PLAY HOCKEY. FIGHT CANCER.